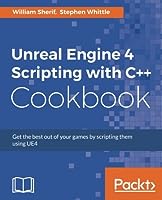 Unreal Engine 4 (UE4) is a complete suite of game development tools made by game developers, for game developers. With more than 100 practical recipes, this book is a guide showcasing techniques to use the power of C++ scripting while developing games with UE4. It will start with adding and editing C++ classes from within the Unreal Editor. It will delve into one of Unreal's primary strengths, the ability for designers to customize programmer-developed actors and components. It will help you understand the benefits of when and how to use C++ as the scripting tool. With a blend of task-oriented recipes, this book will provide actionable information about scripting games with UE4, and manipulating the game and the development environment using C++. Towards the end of the book, you will be empowered to become a top-notch developer with Unreal Engine 4 using C++ as the scripting language.

William Sherif is a C++ programmer with more than eight years of experience in the programming world, ranging from game programming to web programming. He also worked as a university course instructor (sessional) for seven years. Additionally, he released several apps on the iTunes store, including Strum and MARSHALL OF THE ELITE SQUADRON. In the past, he has won acclaim for delivering course material in an easy-to-understand manner.

Stephen Whittle is a game developer and educator with nearly 10 years of development experience, most of which has been done using Unreal Engine. He is a community contributor to the engine, with features or bug fixes included in almost every major version of the engine since its public release.