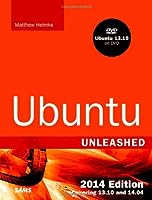 Ubuntu Unleashed 2014 Edition is filled with unique and advanced information for everyone who wants to make the most of the Linux-based Ubuntu operating system. This new edition has been thoroughly revised and updated by a long-time Ubuntu community leader to reflect the exciting new Ubuntu 13.10 and the forthcoming Ubuntu 14.04.

Matthew Helmke served from 2006 to 2011 on the Ubuntu Forum Council, providing leadership and oversight of the Ubuntu Forums, and spent two years on the Ubuntu regional membership approval board for Europe, the Middle East, and Africa. He has written about Ubuntu for several magazines and websites and is the lead author of The Official Ubuntu Book. He works for Pearson Education writing technical documentation for educational
testing software.

Detailed information on how to

DVD includes the full Ubuntu 13.10 distribution for Intel x86 computers as well as the complete LibreOffice office suite and hundreds of additional programs and utilities.

Purchase this book and receive a free Ubuntu 14.04 Kick Start chapter after Ubuntu 14.04 is released. See inside back cover for details How to Download? Report Dead Links & Get a Copy
Online Preview Reviews 24 Get Print Book