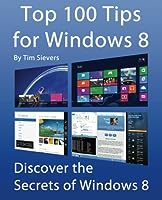 Go beyond the basics and discover the Secrets of Windows 8. This straight forward guide is full of practical step-by-step visual instructions. Screen shots help you learn visually and quickly become productive. From the best selling author of the Kindle Fire Tips & Tricks. Hello, I’m Tim Sievers. I’ve used every Microsoft Operating System (OS) since the days of MS-DOS in the 1980’s and over the years I’ve seen huge improvements in usability and design. However, looking back only one previous version of the OS stands out in my mind as a truly radical re-think of its predecessors, until now. In its day, Windows 95 was a game changer, users no longer had to deal with the dreaded DOS command-line because the user-friendly graphical Desktop was at the forefront of the user experience. After 17 years, Microsoft has dared to re-imagine Windows again. The promotion of the new “Modern User Interface” (Modern UI) ahead of the Desktop and Microsoft’s push for developers to focus on building web-based touch-enabled apps for a new generation of tablets, laptops and PC’s is a major change. I can still see the Desktop remaining a big part of the user experience for a long time to come, but like Windows 95 all those years ago, Windows 8 stands out as a radical redesign. This guide is a collection of the best 100 tips that I have found for Windows 8. Designed to help you get up to speed quickly, this guide covers both the new Modern UI and the improved features of the Desktop. Because Windows 8 is built for both touchscreen and traditional computing devices I have included both touchscreen gesture and keyboard/mouse instructions. Also, as a bonus extra, I have included a list of the most common Windows 8 Keyboard Shortcuts. This handy reference is divided into several categories to help you quickly find the shortcut you need, when you need it. So, whether you’ve just started using Windows 8 or you’ve been using it for a while, I’m sure you’ll find some useful tips here that will improve your Windows 8 experience. How to Download? Report Dead Links & Get a Copy
Online Preview Reviews 56 Get Print Book