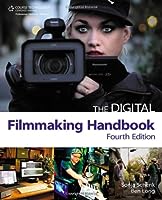 The title of The Digital Filmmaking Handbook is something of an oxymoron, because this thorough book covers everything you need to know about filmmaking production, from concept to screening. The only missing element is film itself.

Film and video production are in transition. Film and analog videotape rapidly are approaching the end of their technological lives, being replaced by digital videotape and digital cameras. You can buy computers that connect to DV cameras and edit DV tape almost anywhere, and they cost only slightly more than an entry-level computer. The Digital Filmmaking Handbook, then, is for anyone buying into the DV revolution who wants to do more than shoot home movies of the kids. It's for filmmakers young and old, professional and hobbyist, who want to learn to shoot, edit, and make great movies.

Unlike traditional filmmaking books, in which only the camera and some audio and editing equipment are addressed, part of this book approaches the medium from a computer hardware and software perspective. Numerous hardware issues like choosing the components for an editing workstation (chapter 5), the kind of digital video camera to use (chapter 6), selecting editing and audio software (chapter 7), and various output formats (chapter 18) are discussed. Also, there are chapters on effects, making video look like film (chapter 17), and digital titling (chapter 16).

The book never strays from speaking to moviemakers instead of moviemaking-gear buyers. Everything from preproduction tasks (such as scripting, storyboarding, and budgeting) to production tasks (like set preparation, lighting, filming (sans film), and sound recording) through final editing, color correction, titles, and output is explained. Filmmaking is heavily dependent on technology, and each of these subjects is well covered. Chapters on audio, for example, include selection of microphone types; differences between mic types; how to connect mics to a DV camera or synchronize audio in postproduction; how to control sound levels; and so on.
The chapter on editing reflects the experience of the authors. Films are understood through their own language, and how scenes are edited determines the dialect of that language. Such techniques as matching screen position, matching emotion and tone, matching action, when to use pauses and overlapping edits, and the effect of pauses and pull-ups (shortening a scene) are defined and justified.
If you can't get into NYU's film school--or even if you can--The Digital Filmmaking Handbook is a worthy reference to keep at your fingertips. --Mike Caputo --This text refers to an out of print or unavailable edition of this title.