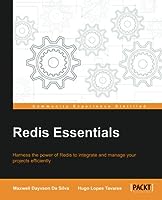 If you are a competent developer with experience of working with data structure servers and want to boost your project's performance by learning about features of Redis, then this book is for you.

Redis is the most popular in-memory key-value data store. It's very lightweight and its data types give it an edge over the other competitors. If you need an in-memory database or a high-performance cache system that is simple to use and highly scalable, Redis is what you need.

Redis Essentials is a fast-paced guide that teaches the fundamentals on data types, explains how to manage data through commands, and shares experiences from big players in the industry.

We start off by explaining the basics of Redis followed by the various data types such as Strings, hashes, lists, and more. Next, Common pitfalls for various scenarios are described, followed by solutions to ensure you do not fall into common traps.

After this, major differences between client implementations in PHP, Python, and Ruby are presented. Next, you will learn how to extend Redis with Lua, get to know security techniques such as basic authorization, firewall rules, and SSL encryption, and discover how to use Twemproxy, Redis Sentinel, and Redis Cluster to scale infrastructures horizontally. At the end of this book, you will be able to utilize all the essential features of Redis to optimize your project's performance.

A practical guide that offers the foundation upon which you can begin to understand the capabilities of Redis using a step-by-step approach. This book is full of real-world problems and in-depth knowledge of the concepts and features of Redis, with plenty of examples.