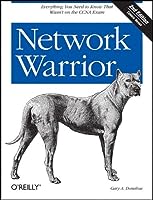 Pick up where certification exams leave off. With this practical, in-depth guide to the entire network infrastructure, you’ll learn how to deal with real Cisco networks, rather than the hypothetical situations presented on exams like the CCNA. Network Warrior takes you step by step through the world of routers, switches, firewalls, and other technologies based on the author's extensive field experience. You'll find new content for MPLS, IPv6, VoIP, and wireless in this completely revised second edition, along with examples of Cisco Nexus 5000 and 7000 switches throughout. How to Download? Report Dead Links & Get a Copy
Online Preview Reviews 21 Get Print Book