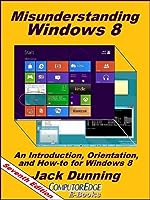 Misunderstanding Windows 8: An Introduction, Orientation, and How-to for Windows 8 (Seventh Edition, August 2013) (Windows Tips and Tricks)
Released August 2013, this revised edition has an all new chapter reviewing Windows 8.1 Preview with the final Windows 8.1 scheduled for release in October 2013. See what's new and changing in Windows 8 in 2013. Is the Start button really back?

"Misunderstanding Windows 8" is a ComputorEdgeBooks Living E-Book™. This e-book is updated and republished on Amazon on a frequent basis with new and evolving information.

Deciphering the madness of Windows 8, the new operating system from Microsoft, while comparing it to Windows 7. Plus, details on Microsoft's Surface tablet computers--both the Surface RT without "real" Windows and the Surface Pro with "real" Windows.

Whether you're an old-line Windows user or merely curious about what Microsoft is up to, this book gives clear guidelines for understanding and tricks for using the new Windows 8 operating system. Jack Dunning, author of Getting Started with Windows 7 and other Windows 7 Secrets books, provides an objective appraisal of Windows 8 while comparing it to Windows 7. (For other titles by Jack on Amazon including his Windows 7 Secrets series, visit Jack Dunning's Amazon Author's Page by clicking his name below the title above.)

Chapter Seven: The Virtual Touch Keyboard, Plus, a Tip for Quick Access to Windows Tools
“Although designed for use with touchscreens and tablet computers, the Windows 8 pop-up keyboard also works with the Windows Desktop.”

Chapter Eight: Windows 8 for both the Desktop Computer and the Tablet. Really? Some Final Thoughts. (Updated October 2012)
“Designing the new Microsoft OS for desktop and tablet computers is a bold move. Will it work?”

Chapter Twelve: Is the Surface with Windows 8 Pro Right for You? (Sixth Edition, Feb 2013)
What you need to know before you buy Microsoft's Surface Pro tablet with "real" Windows. How to Download? Report Dead Links & Get a Copy
Online Preview Reviews 10 Get Print Book