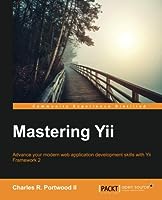 The successor of Yii Framework 1.1, Yii2 is a complete rewrite of Yii Framework, one of the most popular PHP 5 frameworks for making modern web applications. The update embraces the best practices and protocols established with newer versions of PHP, while still maintaining the simple, fast, and extendable behavior found in its predecessor.

This book has been written to enhance your skills and knowledge with Yii Framework 2. Starting with configuration and how to initialize new projects, you'll learn how to configure, manage, and use every aspect of Yii2 from Gii, DAO, Query Builder, Active Record, and migrations, to asset manager. You'll also discover how to automatically test your code using codeception.

With this book by your side, you'll have all the skills you need to quickly create rich modern web and console applications with Yii2.

Charles R. Portwood II has over 10 years of experience developing modern web applications and is well versed in integrating PHP with native mobile applications. An avid proponent of Yii Framework and open source software, Charles has contributed multiple guides, extensions, and applications to the Yii community. In addition to being a programmer, he is also a Linux system administrator.