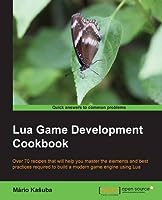 This book is for all programmers and game enthusiasts who want to stop dreaming about creating a game, and actually create one from scratch.

The reader should know the basics of programming and using the Lua language. Knowledge of the C/C++ programming language is not necessary, but it's strongly recommended in order to write custom Lua modules extending game engine capabilities or to rewrite parts of the Lua code into a more efficient form.

Sample demonstrations are coupled with binary libraries for Windows and Linux operating systems for convenience.

The Lua language allows developers to create everything from simple to advanced applications and to create the games they want. Creating a good game is an art, and using the right tools and knowledge is essential in making game development easier.

This book will guide you through each part of building your game engine and will help you understand how computer games are built. The book starts with simple game concepts used mainly in 2D side-scroller games, and moves on to advanced 3D games. Plus, the scripting capabilities of the Lua language give you full control over game.

By the end of this book, you will have learned all about the components that go into a game, created a game, and solved the problems that may arise along the way.