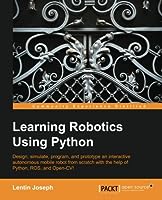 Design, simulate, program, and prototype an interactive autonomous mobile robot from scratch with the help of Python, ROS, and Open-CV!

If you are an engineer, a researcher, or a hobbyist, and you are interested in robotics and want to build your own robot, this book is for you. Readers are assumed to be new to robotics but should have experience with Python.

Learning about robotics will become an increasingly essential skill as it becomes a ubiquitous part of life. Even though robotics is a complex subject, several other tools along with Python can help you design a project to create an easy-to-use interface.

By the end of this tutorial, you'll have a clear idea of how to integrate and assemble all things into a robot and how to bundle the software package.