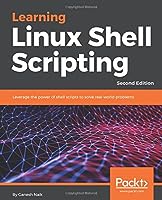 Break through the practice of writing tedious code with shell scripts

Linux is the most powerful and universally adopted OS. Shell is a program that gives the user direct interaction with the operating system. Scripts are collections of commands that are stored in a file. The shell reads this file and acts on commands as if they were typed on the keyboard.

Learning Linux Shell Scripting covers Bash, GNU Bourne Again Shell, preparing you to work in the exciting world of Linux shell scripting. CentOS is a popular rpm-based stable and secured Linux distribution. Therefore, we have used CentOS distribution instead of Ubuntu distribution. Linux Shell Scripting is independent of Linux distributions, but we have covered both types of distros. We start with an introduction to the Shell environment and basic commands used. Next, we explore process management in Linux OS, real-world essentials such as debugging and perform Shell arithmetic fluently. You'll then take a step ahead and learn new and advanced topics in Shell scripting, such as decision making, starting up a system, and customizing a Linux environment. You will also learn about grep, stream editor, and AWK, which are very powerful text filters and editors. Finally, you'll get to grips with taking backup, using other language scripts in Shell Scripts as well as automating database administration tasks for MySQL and Oracle.

By the end of this book, you will be able to confidently use your own shell scripts in the real world.

Learning Linux Shell Scripting is ideal for those who are proficient at working with Linux and want to learn about shell scripting to improve their efficiency and practical skills.