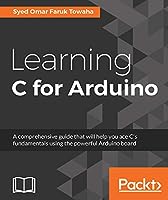 This book will start with the fundamentals of C programming and programming topics, such data types, functions, decision making, program loops, pointers, and structures, with the help of an Arduino board. Then you will get acquainted with Arduino interactions with sensors, LEDs, and autonomous systems and setting up the Arduino environment. Moving on you will also learn how to work on the digital and analog I/O, establish serial communications with autonomous systems, and integrate with electronic devices. By the end of the book, you will be able to make basic projects such as LED cube and smart weather system that leverages C.

Syed Omar Faruk Towaha has degrees in physics and computer engineering. He is a technologist, tech speaker, and physics enthusiast from Shahjalal University of Science and Technology (SUST), Bangladesh. He has passion for programming, tech writing, and physics experiments. His recent books include Easy Circuits for Kids, Fundamentals of Ruby, How You Should Design Algorithms, and JavaScript Projects for Kids. He is an Oracle-certified professional developer who is currently involved with a number of projects that serve both physics and computer architecture. He is currently working as the CTO of an IT company.