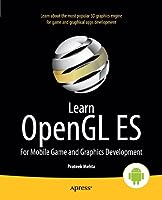 Want to create sophisticated games and graphics-intensive apps? Learn OpenGL ES gets you started immediately with OpenGL ES.  After mastering the basics of OpenGL ES itself, you will quickly find yourself writing and building game apps, without having to learn about object oriented programming techniques.

This book demonstrates the use of a powerful open-source modeling tool, Blender. You will be guided, step by step, through the development of Tank Fence, a dynamic, interactive 3D game. Along the way you'll gain skills in building apps with Eclipse and the Android SDK or NDK, rendering graphics using hardware acceleration, and multithreading for performance and responsiveness. iOS developers will also find this book's information invaluable when writing their apps.

You'll learn everything you need to know about:

Learn OpenGL ES is ideal for mobile game and interactive app developers who want to know more about the OpenGL ES engine and and use it to build more sophisticated, graphically-rich games and other apps. While the code is developed on Android, iOS developers will also find this book invaluable.