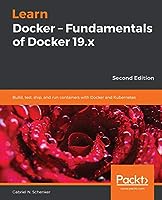 Containers enable you to package an application with all of the components it needs, such as libraries and other dependencies, and ship it as one package. Docker containers have revolutionized the software supply chain in both small and large enterprises.

Starting with an introduction to Docker fundamentals and setting up an environment to work with it, you'll delve into concepts such as Docker containers, Docker images, and Docker Compose. As you advance, the book will help you explore deployment, orchestration, networking, and security. Finally, you'll also get to grips with Docker functionalities on public clouds such as AWS, Azure, and Google Cloud Platform and get acquainted with Docker Enterprise Edition features. Additionally, you'll discover the benefit of increased security with the use of containers.

By the end of this Docker book, you'll be able to build, ship, and run a containerized, highly distributed application on Docker Swarm or Kubernetes, running on-premise or in the cloud.

This book is for system administrators, operations engineers, DevOps engineers, and developers or stakeholders interested in getting started with Docker from scratch. No prior experience with Docker containers is required.