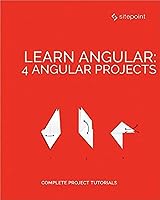 Angular is not just a framework, but rather a platform that empowers developers to build applications for the web, mobile, and the desktop.

This book presents a collection of complete project tutorials: building a bucket-list MEAN stack app; user authentication with MEAN; building a Twitter client with Node and Angular; and connecting Angular and the WordPress API. Along the way, you'll learn how to use Angular and some of its best features.

This book is for all front-end developers who want to get proficient with Angular and its related tools. You'll need to be familiar with HTML and CSS and have a reasonable level of understanding of JavaScript in order to follow the discussion.

Chapter 1: MEAN Stack: Build an App with Angular 2+ and the Angular CLI
Chapter 2: User Authentication with the MEAN Stack
Chapter 3: Building a Twitter Client with Node and Angular
Chapter 4: Connecting Angular and the WordPress API with wp-api-angular