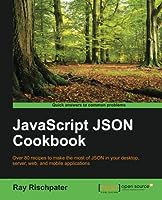 Over 80 recipes to make the most of JSON in your desktop, server, web, and mobile applications

If you're writing applications that move structured data from one place to another, this book is for you. This is especially true if you've been using XML to do the job because it's entirely possible that you could do much of the same work with less code and less data overhead in JSON.

While the book's chapters make some distinction between the client and server sides of an application, it doesn't matter if you're a frontend, backend, or full-stack developer. The principles behind using JSON apply to both the client and the server, and in fact, developers who understand both sides of the equation generally craft the best applications.

This book gives you clear ways that you can exchange objects using JSON, regardless of whether you're developing a web or traditional networked application. You'll start with a brief refresher on JSON and JavaScript syntax and read and write on the client and server. Then, you'll learn how to use JSON in simple AJAX applications using AngularJS and jQuery. Next, you will learn how to exchange objects with databases using MongoDB and CouchDB. You'll also explore how to use JSON in a type-safe manner, writing programs that have fewer bugs.