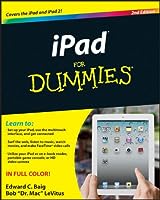 The up-to-date guide to getting the most out of your iPad or iPad 2!

There are many tablets, but there's just one iPad, beloved by everyone from techies and business people to toddlers and their grandparents. With an elegantly thin new form, front-and-rear-facing cameras, and more exciting new features, the iPad 2 puts beauty and function together in one great device. This full-color guide helps you get up to speed and on the go with Apple's latest iPad and iOS operating system software.

Mac experts and veteran For Dummiesauthors Edward Baig and Bob "Dr. Mac" LeVitus walk you through the basics as you set up and explore the iPad, master the multitouch interface, set up your iTunes and your iPad preferences, and start loading your iPad with cool content from iTunes, the App Store, and the iBookstore. You'll get your data synchronized, browse the Internet, and hook up your e-mail; discover how to listen to your music; shoot and view videos and photos; make FaceTime video calls; get directions with Maps; or curl up with a great e-book. Whatever you want your iPad to do, the fun begins right here.

From no-nonsense basics to slick and savvy tips, iPad For Dummies, Second Edition will have you swiping your way to iPad bliss in no time at all.

From the Authors: 5 Incredible Things Your iPad 2 Can Do
The iPad 2 is a combination of a killer audio and video iPod, an e-book reader, a powerful Internet communications device, a superb handheld gaming device, a still and video camera, and a platform for well over 150,000 apps—and growing! In fact, it’s one of the most amazing handheld devices we’ve ever seen, and we think you’ll agree. Here’s a closer look at five incredible things your iPad 2 can do to help you keep your world at your fingertips wherever you go.

HD Video
While the iPad is not going to replace a wall-sized high-definition television as the centerpiece of your home entertainment system, its gorgeous, nearly 10-inch, high-definition display is one of the best we’ve seen on a handheld device and makes watching movies and other videos on the iPad a cinematic delight. What’s more if you have the iPad 2, you now have front and rear facing cameras that can help turn you, under certain circumstances, into a filmmaker—right from the device.

FaceTime
As if HD video was not enough to be excited about, the iPad 2 ventures into another area, video chat. You can keep in touch with friends and loved ones by gazing into each other’s pupils with FaceTime, a clever video chat program built right into the device. The iPad 2’s front camera lets you talk face to face while the back camera can be used to show the person you’re talking to what you’re seeing.

Your conversation partner must have an iPad 2, an Intel-based Mac computer, an iPhone 4, or a recent model iPod touch to use FaceTime with you.

The iPad 2 brings both a front and rear camera to the iPad experience and allows you to shoot pictures directly with your prized tablet. Although the iPad 2 will never be a substitute for a point-and-shoot digital camera or pricey DSLR, having cameras on your iPad 2 is a godsend when no better option is available plus the device makes a spectacular photo viewer for crisp and vivid images that were shot with your own digital camera and imported to the iPad.

Photo Booth is another fun feature that takes advantage of the iPad 2’s cameras. Modeled after the old-fashioned photo booths of days gone by, the Photo Booth app is a modern alternative to a photo booth machine and allows you to ham it up solo or with a friend to capture fun and kooky images using your iPad 2. You’ll have a blast with this blast from the past!

Awesome Accessories
Anyone who has purchased a new car in recent years is aware that it’s not always a picnic trying to escape the showroom without the salesperson trying to get you to part with a few extra bucks for the latest accessories.

Similarly, Apple and several other companies are all too happy to outfit your iPad 2 with extra doodads from wireless keyboards and stands to battery chargers and carrying cases. So just as your car might benefit from dealer (or third-party) options, so too might your iPad. There are few Apple-branded accessories worth checking out:

Smart Cover: More a cover than case and made specifically for iPad 2, the Smart Cover is ultrathin and attaches magnetically. Open the cover, even just a little bit, and your iPad 2 wakes up; flip it shut and it goes back to sleep. The cover can also be converted into an iPad stand.

Wireless Keyboard: Apple’s Wireless Keyboard gives you a way to use a top-notch physical keyboard without tethering it to the iPad 2. It operates from up to 30 feet away from the device via Bluetooth and runs on two AA batteries.

Digital AV Adapter: The newest edition to the Apple adapter family, Apple’s Digital AV Adapter lets you connect your iPad 2 to TVs, projectors, and larger VGA displays so you can watch videos, slide shows, and presentations on the big screen. But, the fun doesn’t stop there, this adapter lets you mirror the iPad 2 display via HDMI on a big screen TV, too, which is great for playing Angry Birds among other things, of course.

The App Store
Okay, so the App Store was around before the iPad 2, but it’s such an amazing feature that we think it bears mentioning here anyway. In fact, you could make the argument that the most compelling app on the iPad is the App Store app itself. This online emporium has an abundance of splendid programs—dare we say killer apps in their own right?—many of which are free. These cover everything from food (hey you gotta’ eat) to show biz. And, although there may be some rotten apples (aren’t we clever) in the bunch, the App Store abounds with applications that are so sweet and so useful that just about everybody wants or must have them!

Feeling overwhelmed by all those apps? Check out the What’s Hot, New and Noteworthy and Staff Favorites departments in the App Store to see what apps are popular with other iPad users. You can also visit the Top Charts section to see a list of the Top 100 bestselling paid and free apps available in the App Store. How to Download? Report Dead Links & Get a Copy
Online Preview Reviews 65 Get Print Book