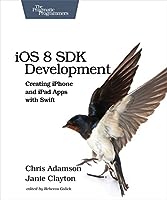 The iOS 8 SDK changes everything. New programming language, new ways to work with other apps, new tools to do cool stuff. In a world of iPhones and iPads, it's a great time to make a fresh start developing apps for the platform. This book guides you through the state of the art of iOS development, including the radically overhauled Xcode 6 toolchain, the iOS 8 SDK, and the new iPhone 6 and iPhone 6 Plus. Entirely rewritten to use Apple's new Swift programming language, this book will take you through the fundamentals of writing apps that are responsive, adaptive, practical, and exciting.

Whether you're starting out or starting over, iOS 8 has set developers on a new path. With a capable and practical new programming language, a wide variety of new features and frameworks, and a new spirit of openness and connectivity, it's a long way from the locked-down, webapps-only original iPhone.

iOS 8 SDK Development is a practical guide to the essentials of developing for iOS 8. You'll start building and revising a real app that's written entirely in Apple's new Swift programming language. You'll send network requests and handle the responses, build from one screen to many, adapt from the close confines of the iPhone screen to the wide expanse of the iPad, and accommodate the big iPhone 6 in between.

You'll master the fundamentals of keeping apps responsive with Grand Central Dispatch, organize your logic into View Controllers, delight users with multi-touch gestures and photo manipulation, and offer services to other apps through iOS 8 Extensions. You'll also learn the fine arts of testing, debugging, and the care and feeding of your app before submitting to the App Store--and after it's in the public's hands.

The iOS 8 SDK changes everything. Change with it. It's only getting better.