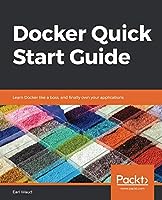 Docker is an open source software platform that helps you with creating, deploying, and running your applications using containers. This book is your ideal introduction to Docker and containerization.

You will learn how to set up a Docker development environment on a Linux, Mac, or Windows workstation, and learn your way around all the commands to run and manage your Docker images and containers.

You will explore the Dockerfile and learn how to build your own enterprise-grade Docker images. Then you will learn about Docker networks, Docker swarm, and Docker volumes, and how to use these features with Docker stacks in order to define, deploy, and maintain highly-scalable, fault-tolerant multi-container applications.

Finally, you will learn how to leverage Docker with Jenkins to automate the building of Docker images and the deployment of Docker containers. By the end of this book, you will be well prepared when it comes to using Docker for your next project.

This guide is for anyone who needs to make a quick decision about using Docker for their next project. It is for developers who want to get started using Docker right away.