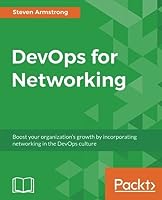 Boost your organization's growth by incorporating networking in the DevOps culture

The book is aimed for Network Engineers, Developers, IT operations and System admins who are planning to incorporate Networking in DevOps culture and have no knowledge about it.

Frustrated that your company's network changes are still a manual set of activities that slow developers down? It doesn't need to be that way any longer, as this book will help your company and network teams embrace DevOps and continuous delivery approaches, enabling them to automate all network functions.

This book aims to show readers network automation processes they could implement in their organizations. It will teach you the fundamentals of DevOps in networking and how to improve DevOps processes and workflows by providing automation in your network. You will be exposed to various networking strategies that are stopping your organization from scaling new projects quickly.

You will see how SDN and APIs are influencing DevOps transformations, which will in turn help you improve the scalability and efficiency of your organizations networks operations. You will also find out how to leverage various configuration management tools such as Ansible, to automate your network.

The book will also look at containers and the impact they are having on networking as well as looking at how automation impacts network security in a software-defined network.

This will be a comprehensive, learning guide for teaching our readers how networking can be leveraged to improve the DevOps culture for any organization.