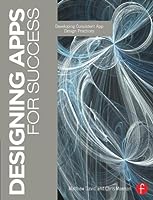 In 2007, Apple released the iPhone. With this release came tools as revolutionary as the internet was to businesses and individuals back in the mid- and late-nineties: Apps. Much like websites drove (and still drive) business, so too do apps drive sales, efficiencies and communication between people. But also like web design and development, in its early years and iterations, guidelines and best practices for apps are few and far between.

provides web/app designers and developers with consistent app design practices that result in timely, appropriate, and efficiently capable apps. This book covers application lifecycle management that designers and developers use when creating apps for themselves or the entities that hired them. From the early discussions with a company as to how to what kind of app they want, to storyboarding, to developing cross platform, to troubleshooting, to publishing, Designing Apps for Success gives a taut, concise, and pragmatic roadmap from the beginning of the process all the way to the end. Developers and designers will learn not only best practices on how to design an app but how to streamline the process while not losing any quality on the end result. Other topics in this book include: