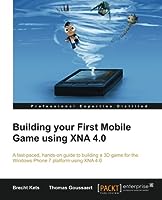 A fast-paced, hands-on guide to building a 3D game for the Windows Phone 7 platform using XNA 4.0

With the dawn of the Windows Phone 7 platform, Microsoft has offered us an easy way to create 3D mobile games. In this book, we will build a 3D game for Windows Phone 7 together, taking full advantage of the graphics and touch capabilities, along with the sensors of the platform.

"Building your first mobile game using XNA" is the book for starting game development on the Windows Phone 7 platform. This book will go over the technical aspects of building games along with designing your own framework. Finally we'll build an actual game together from the ground up! This book will set future mobile game developers in the right direction.

In this book, we will cover drawing 2D and 3D graphics, both static and animations. We will also cover the various ways of handling user input and help set the mood of our game playing both 2D and 3D sound, and accessing the user's media library. The only thing left before building a game is covering several techniques created for making our life easier while building the game, whilst building a framework to do just that. Finally, we'll build a 3D game together that will run on the Windows Phone 7 platform.

"Building your first mobile game using XNA" is the book you need to get started with mobile game development for Windows Phone 7. Its hands on approach will set you on your way in no time. Let's build some games!

This book is a step-by-step tutorial with a lot of screenshots that help to explain the concept better.

This book will cover the building of a 3D game for Windows Phone using XNA. We won't explain the C# programming language itself, nor object-oriented programming.

We will however explain the aspects of game development thoroughly, so don't worry if you have never written a 3D game. We will cover all the basics, included the much dreaded math.