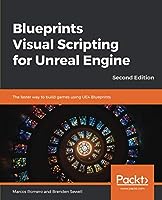 Blueprints is the visual scripting system in Unreal Engine that enables programmers to create baseline systems and can be extended by designers.

This book helps you explore all the features of the Blueprint Editor and guides you through using Variables, Macros, and Functions. You'll also learn about object-oriented programming (OOP) and discover the Gameplay Framework. In addition to this, you'll learn how Blueprint Communication allows one Blueprint to access information from another Blueprint. Later chapters will focus on building a fully functional game using a step-by-step approach. You'll start with a basic first-person shooter (FPS) template, and each chapter will build on the prototype to create an increasingly complex and robust game experience. You'll then progress from creating basic shooting mechanics to more complex systems, such as user interface elements and intelligent enemy behavior. The skills you will develop using Blueprints can also be employed in other gaming genres. In the concluding chapters, the book demonstrates how to use arrays, maps, enums, and vector operations. Finally, you'll learn how to build a basic VR game.

By the end of this book, you'll have learned how to build a fully functional game and will have the skills required to develop an entertaining experience for your audience.

This book is for anyone who is interested in developing games or applications with UE4. Although basic knowledge of Windows OS is required, experience in programming or UE4 is not necessary.