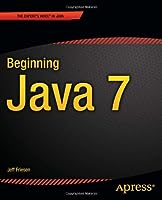 Beginning Java 7 guides you through this language and a huge assortment of platform APIs according to the following table of contents:

Chapter 1 introduces you to Java and begins to cover the Java language by focusing on fundamental concepts such as comments, identifiers, variables, expressions, and statements.

Chapter 2 continues to explore this language by presenting all of its features for working with classes and objects. You learn about features related to class declaration and object creation, encapsulation, information hiding, inheritance, polymorphism, interfaces, and garbage collection.

Chapter 3 focuses on the more advanced language features related to nested classes, packages, static imports, exceptions, assertions, annotations, generics, and enums. Additional chapters will introduce you to the few features not covered in Chapters 1 through 3.

Chapter 4 largely moves away from covering language features (although it does introduce class literals and strictfp) while focusing on language-oriented APIs. You learn about Math, StrictMath, Package, Primitive Type Wrapper Classes, Reference, Reflection, String, StringBuffer and StringBuilder, Threading, BigDecimal, and BigInteger in this chapter.

Chapter 5 begins to explore Java's utility APIs by focusing largely on the Collections Framework. However, it also discusses legacy collection-oriented APIs and how to create your own collections.

Chapter 6 continues to focus on utility APIs by presenting the concurrency utilities along with the Objects and Random classes.

Chapter 7 moves you away from the command-line user interfaces that appear in previous chapters and toward graphical user interfaces. You first learn about the Abstract Window Toolkit foundation, and then explore the Java Foundation Classes in terms of Swing and Java 2D. Appendix C explores Accessibility and Drag and Drop.

Chapter 10 dives into Java's XML support by first presenting an introduction to XML (including DTDs and schemas). It next explores the SAX, DOM, StAX, XPath, and XSLT APIs. It even briefly touches on the Validation API. While exploring XPath, you encounter namespace contexts, extension functions and function resolvers, and variables and variable resolvers.

Chapter 11 introduces you to Java's support for SOAP-based and RESTful web services. In addition to providing you with the basics of these web service categories, Chapter 11 presents some advanced topics, such as working with the SAAJ API to communicate with a SOAP-based web service without having to rely on JAX-WS. You will appreciate having learned about XML in Chapter 10 before diving into this chapter.

Chapter 12 helps you put to use some of the knowledge you've gathered in previous chapters by showing you how to use Java to write an Android app's source code. This chapter introduces you to Android, discusses its architecture, shows you how to install necessary tools, and develops a simple app.

Appendix A presents the solutions to the programming exercises that appear near the end of Chapters 1 through 12.

Appendix B introduces you to Java's Scripting API along with Java 7's support for dynamically typed languages.

Unfortunately, there are limits to how much knowledge can be crammed into a print book. For this reason, Appendixes A, B, C, and D are not included in this book's pages. Instead, these appendixes are freely distributed as PDF files. Appendixes A and B are bundled with the book's associated code file at the Apress website (http://www.apress.com).

Appendixes C and D are bundled with their respective code files on my TutorTutor.ca website at http://tutortutor.ca/cgi-bin/makepage.cgi?/books/bj7. Appendixes C and D are "living documents" in that I'll occasionally add new material to them. For example, I plan to expand Appendix C by also covering Java Naming and Directory Interface, Java Sound, Remote Method Invocation and Corba, Robot, Runtime and Process, Swing Timer, and many other APIs/architecture topics (including a complete tour of Swing components). Of course, it will take time to write about these topics so don't expect all of them to appear at once -- they will slowly emerge in coming months (although smaller topics such as Robot will emerge much faster).

This book targets the following groups of developers: