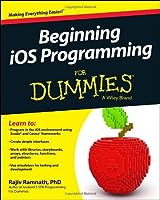 The ultimate beginner's guide to programming in the iOS environment

The Apple App Store is a gold mine for developers, but with more apps for the iPhone, iPad, and iPod touch being added every day, it?s essential to have a solid programming foundation to create the best apps possible. If you're eager to learn the ins and outs of iOS programming, this is your book. It teaches object-oriented programming within the iOS framework from the ground up, preparing you to create the next super iPhone or iPad app.

Get a handle on the iOS framework, object-oriented best practices, and the Xcode programming environment, then discover how to create simple interfaces, use libraries, create and extend objects, and more. Whether you're just starting out in programming or only new to iOS, For Dummies is the perfect beginning.

Beginning iOS Programming For Dummies is your straightforward guide to getting started with iOS programming.