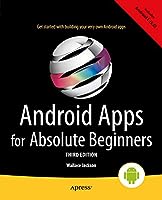 Anybody can start building multimedia apps for the Android platform, and this book will show you how! Now updated to include both Android 4.4 and the new Android L, Android Apps for Absolute Beginners, Third Edition takes you through the process of getting your first Android apps up and running using plain English and practical examples. If you have a great idea for an Android app, but have never programmed before, then this book is for you.

This book cuts through the fog of jargon and mystery that surrounds Android apps development, and gives you simple, step-by-step instructions to get you started.

This book covers both Android 4.4 (KitKat) and Android L, but is also backwards compatible to cover the previous Android releases since Android 1.5.

If you have a great idea for an Android app, but have never programmed before, then this book is for you. You don’t need to have any previous computer programming skills—as long as you have a desire to learn, and you know which end of the mouse is which, the world of Android apps development awaits!